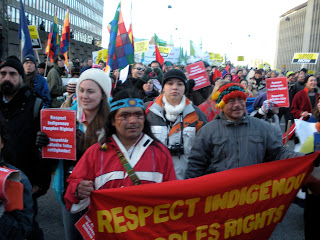 With the current climate change talks taking place through December 7th, governments at this 18th COP in Doha, Qatar, will likely set the path toward creating a market for carbon credits from forests. Otherwise known as REDD+, this mechanism aims to Reduce Emissions from Deforestation and Degradation by offering financial incentives to developing countries to protect their forests. This includes the expanded focus of conservation, sustainable forest management and restoration. Organizations such as the Indigenous Environmental Network on the other hand associate the term REDD with reaping profit from evictions, land grabs and deforestation, and associate the + with industrial plantations and exclusive protected areas. This notes the hotly contested nature of the mechanism to protect the worldʼs remaining forests. The potential success of REDD+ depends on the extent to which Indigenous peoples rights are included as an essential part of REDD+.

Indigenous peoples territories include a substantial portion of the earthʼs remaining intact ecosystems and forest lands--lands which they have stewarded--and 80% of the worldʼs biodiversity is on Indigenous land. Indigenous forest management in Mexico, Central and South America has been shown to be at least two times more effective than any other means of protection. The protection of the rights of Indigenous peoples to their lands, territories, environment and “natural resources” (despite a common dislike of the term that denudes the living earth to a resource for use) is essential and a critical strategy for preventing deforestation and should be a central goal of REDD+.

Indigenous peoples have been strong in asserting their position of skepticism on REDD+. As the implementation of REDD programs develop, it is essential these voices remain strong and that the legal community continually demand and check that free prior and informed consent and other rights outlined in the UN DRIP are being properly respected and incorporated into the structure of REDD+ programs. These rights must be promoted as essential to the effective implementation of such programs.

Written for SIEL by:
Karen Swift, 2L
No comments:
Email ThisBlogThis!Share to TwitterShare to FacebookShare to Pinterest
Labels: Human Rights

Coal: An Unwanted Relic of Yesteryear

There was a time in history when people didn’t have cars, when people didn’t have planes, and people rarely traveled more than twenty or thirty miles from their home. There was a time when most production came from a farm or a skilled tradesman. This all began to change starting with the industrial revolution, a revolution largely powered by coal.

Today, trips across the country and around the world are common. Today we can communicate instantly with anyone around the world. Today we even have boxes whose sole purpose is to record our favorite shows all so that we are not inconvenienced by missing them in the rush of our busy lives. Today a large percentage of energy still comes from coal, despite the introduction of numerous other technologies that could reduce the need for coal.

However, industry doesn’t want to hear this. For them, coal represents cheap profits. They choose to ignore the fact that when one looks at the big picture, coal is anything but cheap. Coal is shipped from where it is mined using coal trains. These coal trains spread coal dust along their route, increasing the risk of respiratory problems for people who live near them. Furthermore, there have been close to 20 coal train derailments this year alone.

Despite this, big coal companies such as Arch Coal and Peabody Energy are proposing to ramp up coal export to China. They seek to strip mine coal in the Powder River basin in Wyoming and Montana, ship them through the Northwest on coal trains that could each be over a mile long and have several export terminals along the northwest coast for shipment overseas to China. When China burns the coal they would not only be harming their already compromised environment, but the air pollution could then travel back across to Pacific, impacting air quality along the west coast.

While it will ultimately be the U.S. Army Corps that decides whether to approve the permits for coal export terminals in the Pacific Northwest, the resulting harm will be felt not only here, not only in China, but also globally.  The increased consumption of coal exacerbates a planet already facing climate change crisis. The reality of China's environment and the global issues related to these proposals are addressed by Izzy, an international student, in her recent testimony at the November 3rd Harbor, WA hearings.


Written for SIEL by:
Juan Bacigalupi, 2L
No comments:
Email ThisBlogThis!Share to TwitterShare to FacebookShare to Pinterest
Labels: Climate Change

The Reality of Bear Bile Trade

Bear bile has been used for thousands of years in traditional Chinese medicine.  The active ingredient found in bear bile, ursodeoxycholic acid (UDCA), can be used to treat ailments such as fever, gall stones, heart disease, and liver problems.  UDCA is less expensive to produce synthetically than to extract from the gall bladders of bears.  However, thousands of Asiatic black bears still suffer on bear bile farms and are poached in the wild in China, South Korea, and Vietnam.

A technique, called “milking,” is used to extract bile from the bears’ gallbladders. A catheter is surgically implanted into the bear’s abdomen and bile is drained once or twice a day.  Milking begins at the age of three and continues for up to twenty years.  The bears are kept in cages so small that they cannot turn around and frequently suffer from muscle atrophy and malnourishment.  Milking is extremely painful and the bears show signs of extreme psychological trauma, some are even reported to attempt suicide. 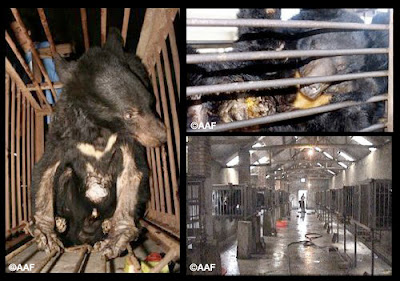 Bear farming was encouraged by the government of China starting in the 1980s as an attempt to mitigate threats to wild Asiatic black bears from hunting for their gallbladders.  Farming has actually had the opposite effect by fueling the demand for bear bile as a result of lower prices.  The demand in China, for example, has risen from about 500 kilos to 4,000 kilos annually.  Wild bears are still frequently hunted throughout Asia for their bile and are used to stock existing farms.

Asiatic black bears are threatened with extinction and listed under Appendix I of The Convention on International Trade in Endangered Species of Wild Fauna and Flora (CITES).  International trade in Asiatic black bear parts is prohibited except in exceptional circumstances.  Although China, South Korea, Vietnam, and the United States have all signed CITES, failures to implement controls necessary to enforce the agreement are rampant.  Bear bile and gallbladders are frequently smuggled across borders hidden in coffee or chocolate.  Customs searches are often inadequate to locate hidden goods.

Nationally, Asiatic black bears are protected as an endangered species in China under China’s Wildlife Protection Law.  A limited number of permits are issued only to kill nuisance bears.  Few violators are ever caught or prosecuted under this law, however.  China has agreed to stop issuing permits for new bear bile farms and Vietnam has agreed to phase out farms, as well.  Bear bile farming is currently illegal in South Korea, although a large number of farms are still operating.

Under the Pelly Amendment, the United States may impose sanctions against countries that violate international agreements such as CITES.  However, sanctions are rare due to a fear of violating the World Trade Organization.  The Lacey Act also regulates the trade in bear parts in the United States.  Providing a legal remedy for CITES violations, the Lacey Act makes it a federal offense to buy, sell, or transport in interstate commerce any wildlife parts that were taken in violation of a state, federal, or foreign law.  Since it is very difficult to prove the origin of illegal bear parts, such as bile, prosecutions under the Lacey Act are rarely successful.

Public awareness about bear bile is increasing.  Many organizations, including Animals Asia, are actively working to end the trade of bear bile, reducing hunting, and end the cruel confinement of Asiatic bears.  The International Union for the Conservation of Nature (IUCN) voted for a motion to end bear bile farming at their World Congress in September 2012.  With proper enforcement of existing international framework, as well as increased public awareness, threats to endangered Asiatic bears can be minimized.