Sustainable Agriculture in the UN article 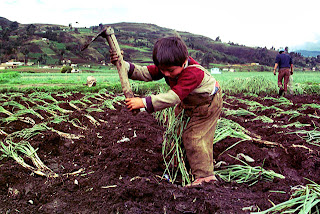 The UN Conference for Trade and Development recently reported in a 321 page document about sustainable agriculture entitled “Wake up Before it’s too late: Make Agriculture Truly Sustainable Now for Food Security in a Changing Climate”. The document consists of topics such as the range of benefits of locally developed plant varieties, carbon sequestration as social justice, and democratizing access to seeds and other products. The article argues for organic, low-input, small-scale agriculture as the best means for feeding the world and managing the stress of drought, rain, and other weather catastrophes that are brought about by climate change. Though the UN does not specifically endorse this document, having the organization’s logo on the cover of the publication carries significance.
Two writers for the report, Miguel Altieri and Parviz Koohafkan, discuss a thesis regarding the importance of various forms of traditional agriculture found around the world. They argue for a focus on the history of adaptation, the ability of humans to adjust and adapt to the changing physical and material environment from generation to generation. Since our world will be reaching 8 billion, the need for adaptation is pertinent. Last year, the Director of National Intelligence’s Global Trend Report for 2030 singled out biotechnology as the most promising means for tackling climate change issues as the demand for resources increases and the supply decreases. Industrial agriculture, as Altieri stated, is not feeding the world -- “Most of what it produces is biomass, which is for cattle, biotech crops, and biofuels.”
Altieri would rather see an approach to agriculture that takes into account the historical knowledge that we have gained over time. He bodes for the development of a western scientific approach based on the practices of other countries that have been pressed with agricultural changes and challenges.  The report also indicates a need to step away from a “green revolution” approach that was developed by Nobel Laureate Norman Borlaug in the 1960s. His approach was indicated by the transition of Latin American and Asian farming to modern hybrid wheat and rice varieties that were grown with irrigation and synthetic fertilizers and pesticides. The report critiques this approach, instead arguing for “ecological intensification.”
The discrepancy between the two theories is only a means to change the conversation about how to approach issues of global agriculture. The Bill and Melinda Gates Foundation is working to continue the Green Revolution approach, but also is keeping in mind sustainability and biotechnology. They are working toward providing farmers access to seeds that are affordable, giving farmers the option of what strategy to use in obtaining he benefits of innovative farming practices. Perhaps the real focus should be on how to widely implement these ideas. Is the implementation based on politics, science, morality, or social movements? We need to change our attitude about chemical production of food to adapt to the struggles of our environment to handle such production methods, putting the focus on sustainable practices rather than merely altering the chemical structure of the foods we grow.

Palm Oil; what we can do


Harvesting palm oil in Southeast Asian has been a controversial issue for many reasons. The topic first drew media attention when the harvesting led to destruction of orangutan habitat in order to replace the natural forest with oil palm plantation. Many of these orangutan species, such as the Sumatran orangutan and the Borneo orangutan, are currently considered endangered. Habitat destruction makes these endangered species more vulnerable. Fragmentation of habitat not only reduces the natural habitat for these species but also allows easier access for hunters and traders. Many poaching occur in these areas because illegal pet trade is prevalent.


Recently, environmental groups have been highlighting another issue: effects of deforestation to the ecosystem. To convert the forest to a plantation, the palm oil industry sometimes sets forest fires to clear the forest. This practice clears the forest, but at the same time, burns many animals to death in the process. Also, scientists have warned about the effects of such practices because the forest fires increase the carbon dioxide emission, which contributes to the global climate change. Forests are large carbon dioxide sinks, and a plantation does not have the same capacity to sequester as much carbon dioxide as a natural forest. Lastly, the smoke from fire decreases the air quality in the area, affecting animal and human health.


In addition, switching from a forest to a plantation also reduces tree species diversity because the plantations use monoculture practices to maximize the profit from palm oil. For example, a state agency in Malaysia announced in July that oil palm plantation has driven a subpopulation of keruing paya in Peninsular Malaysia to extinction. The reduction of species diversity is problematic because a disease can spread far more quickly over a large area if only one species exist in the area; on the other hand, when many species occupy an area in a forest, different species can act as a buffer against spreading of a disease.


SIEL is starting a project this year to increase awareness of these issues on Lewis & Clark Law campus. Palm oil tends to be used in baked goods, lotion, and soap. We will initially target these products and ask the vendors to replace the item with a palm oil-free product. This project aims to eliminate any palm oil from the campus, as well as educate the students and the vendors on the current issues.
No comments:
Email ThisBlogThis!Share to TwitterShare to FacebookShare to Pinterest
Labels: Biodiversity, Climate Change, Sustainability
Newer Posts Older Posts Home
Subscribe to: Posts (Atom)